I installed a new main system drive last week, a Western Digital Caviar Black 500GB to replace the aging SATA 1.0 74GB Raptor that has been in my development box since 2005. The new drive is three times faster, and lots bigger. So, to celebrate all that empty space I started dragging out old games to see if I could get them to install and run. Just to set the stage: my main development system is a Core 2 E8500 with 8GB of DDR3 RAM, on an Asus motherboard. The graphics card is an NVidia GTS-250. Audio-wise I use the onboard Realtek for Skype, and an Audigy 4 Pro for games/movies/etc. The operating system is Windows 7 Enterprise 64-bit.

I had some successes and some failures. Rise of Nations, circa 2003, ran fine in widescreen with a little hacking. Age of Empires II, circa 1999, worked but the graphics were messed up, and widescreen/hi-res modes were unavailable. Railroad Tycoon 3, circa 2003, worked fine, including widescreen with a hack to the engine.cfg file, but when patched with the Coast-to-coast expansion it broke. But the backward compatibility award of the day goes to Empire Earth, designed by Rick Goodman of Age of Empires, developed by Stainless Steel Studios and released in 2001 by publisher Sierra. Empire Earth installed and ran flawlessly in 1920 x 1200 widescreen mode. Here’s a shot: 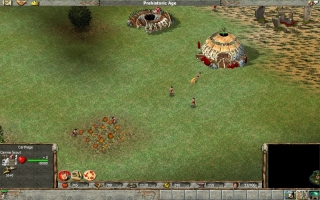 The game ran perfectly in version 1.0 right out of the box. Worked perfectly after patching to 1.04 and then 2.0 as well. Sound worked, all available resolutions were supported, the graphics looked great, the game play was as I remembered. This is quite a feat for a nine year-old title. When Empire Earth was released the minimum system requirements included a Pentium II running at 350 Mhz., and at least 64MB of RAM. If you wanted to enjoy the game’s visuals you were requested to have at least 1024 x 768 pixels available. I think I have more pixels in some of my desktop icons now. Windows XP had just been released, and the hot video cards were the GeForce3 and the original Radeon. The other supported chipsets read like the walls in a technology mausoleum: 3dfx, Savage, Matrox, PowerVR. Network play? You’ll need a 28.8 kbps modem, pal.

As a developer myself I am thoroughly impressed anytime something this old installs and runs the way it was originally designed to. Microsoft gets slapped around a lot these days for being stodgy and unhip, not to mention monopolistic. But they don’t often get the compliments they deserve for getting the big picture right, establishing sensible and well-designed APIs, and then managing them well over the decades. The developers who worked on Empire Earth should be proud of themselves as well. It’s got to feel good to know that someone can take your nine year-old efforts, pop them onto a modern 64-bit DirectX 11 platform, and just have it all work. Well done, guys.