The Federal census for Cuyahoga county, Ohio, for the year 1900 shows Edward R. and Lena Betz living at 35 Marion street, next door to the old store/home that Alois and Rosina purchased in 1873. The records begin at the bottom of page 1 and continue at the top of page 2. The home was actually owned by their brother Louis, having been purchased by him from a John Collister in 1898. Note also that there is a William Betz living just down the street at 31 Marion, but since his birth is given as Nova Scotia it is unlikely he is a relative. 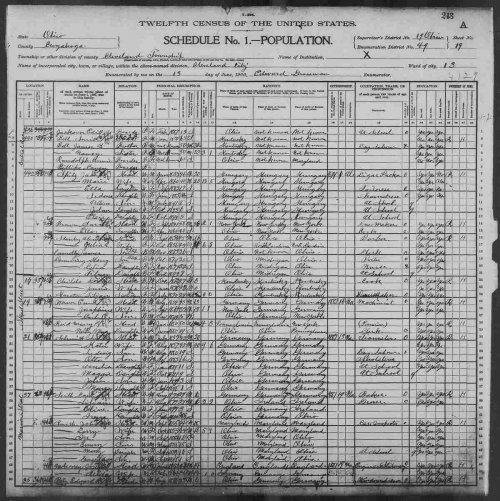 The record of the birth of Alois and Rosina’s youngest child, my great-grandfather Edward R. Betz, on July 19th, 1876. Note that the attending physician, P. J. Spenser, is the same who would attend Alois at his death 15 years later.

This series of nine pages from Cleveland city directories published between 1873 and 1891 reveals quite a lot about the changes in Alois and Rosina’s household over the period. In the 1873 directory Louis, Sr. is listed as a carpenter, while Louis, Jr. is practicing organ making. During that year he and Rosina purchased the property at 37 Marion, and by the 1879 directory he is listed as a grocer.

The 1887 directory shows some big changes. Alois lists himself as a cabinetmaker again, although we are pretty sure from later directories that he was still in the grocery trade. Son Charles is working as a coachman. Louis is working as a cashier for “E.R. Hull & Co.” William is listed as working for “Keller, Betz, and Co.” Two new names show up as residing at the 37 Marion property as well: George Betz, a puddler, and Lawrence Betz, a plumber.

The 1890 and 1891 directories give us our final look at the family just before and after Alois’ passing in April of 1891. In the 1890 listing Charles is working as a teamster, John is a clerk, Joseph has taken over the grocery, apparently, Louis is still a cashier for E.R. Hull, and William is a machinist. George and Lawrence are still there, the one remaining a puddler and the other reduced to laborer.

Finally in the 1891 directory John has become a bartender, Lawrence is back to plumbing, and Rosa is listed for the first time, as Alois’ widow.

A page from the Ebensburg Democrat-Sentinel, 1866, showing that “Alose” Betz had his interest in a house on 1/2 lot sold for an outstanding tax bill of $5.46. We have no further proof that this is Alois Betz, however 1866 is about when he moved to Cleveland and wed Rosina Zweitinger, so it is plausible at least that this is either part of the cause or effect of that change.

Alois’ name is near the bottom of the right column.

Whoever took the time to organize these documents many years ago decided to label the wanderbuch as document #1. I’ll certainly agree that it is number one in several aspects: it’s the most fascinating of the documents, offers the most potential insight into Alois’ pre-emigration years, is easily the most fragile, and required the greatest number of 1200 DPI scans (29) and image processing steps (200+).

Even though we have been able to translate only a very little of the text in this book, it nonetheless tells us quite a bit about Alois. A wanderbuch was a document issued to an apprentice tradesman on the completion of his term with his first master. The apprentice was expected to hit the road with his tools and his few belongings and provide his services to different masters in different towns, i.e. to become literally a journeyman. As work was completed in each place an entry was made in the book by the master for whom the job was done, and invariably the entry was stamped by a local official. Here is an excellent example of another wanderbuch belonging to a man strikingly like Alois.

We know therefore that Alois was a skilled tradesman. The 1860 federal census lists his occupation as cabinet maker, and the word “Schreiner” used to describe his trade here and in other German documents is consistent with that. We know that he received the book in 1846 from his master, and that it was stamped by the landsgericht in Kipfenberg, costing him 3 kreutzer. We know that he then traveled to a large number of places to work, as will be seen by the entries in the book. If we can manage to translate any of them we may learn a great deal more, but this will be a difficult chore.

Wanderbuch inside front cover. Liner was at one point written on but has been removed.

Page 2 contains a stern warning against forging entries, signed by Alois to show that he understood the penalties. Page 3 contains Alois’ personal information as well as the name of his trade.

<< Back to German documents