I am not even remotely a photographer, and so most of what you’ll see here, should you care to look, might be valued more for the content and not-too-offensive quality of presentation, rather than any particular artfulness of composition. Two albums are currently linked, the first containing images of an historic nature related specifically to my home state of New Jersey. The second contains featured photos of no particular subject or theme.

The Mountain Road from Millbrook

I hiked north out of Millbrook one sunny Saturday to trace the road along Vancampens Brook. I wanted to get a sense of why it was there, and where it went. Along the way I took these pictures.

One Sunday afternoon I set out to follow the route of the Central Railroad of New Jersey's Chester Branch, and perhaps find the remains of a 19th century blast furnace.

The Orchard Trail and Ridge Road 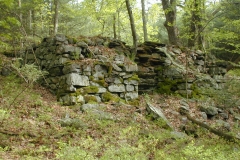 These pictures were taken on a hike from Millbrook up to Ridge Road, and into the woods in quest of an old road from an old map, and perhaps the remains of years gone by.

The Depue and Kinney Farms

Not far off the Old Mine Road, up a narrow forest track that was once a farm lane, near a vanished town with a biblical name, the Depue and Kinney families tilled the land. I took a hike to the sites of these old homesteads and found some interesting things. 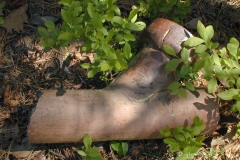 In 1850 clay was the latest natural resource that would produce riches, at long last, from the New Jersey Pine Barrens. Scattered on the ground near the corner of two forgotten lanes in Lacey Township lie the broken remains of what proved to be just another pipedream: the Union Clay Company.

Near the long-vanished town of Calno the Van Campen family once operated a grist mill. Uphill to the east the family farmhouse stood, not far from the Ribbles place where the Post Office used to be. Across the road toward the river the Depues lived, farmed, and were buried on ground that was settled in the 17th century. Everywhere are the old buildings and outbuildings, stone walls and discarded farm implements. This land has some of the oldest memories in America. 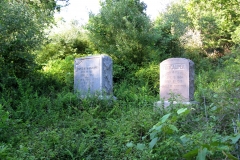 The Vancampens are one of the original pioneer familes of New Jersey, having settled the Pahaquarry region along the Delaware perhaps as early as the late 17th century. I had maps that showed me where their burial ground should be. I had seen references to it in various surveys and geneological databases. But despite three attempts to penetrate the thick, thorny brush that blankets the area, I had found nothing. On my latest trip I happened to look in the right direction at the right time, and after offering some skin, a shredded shirt, ripped jeans, and many curses to the God of all Explorers, I found myself standing amidst the tombs of the Vancampens. These are images from that trip. 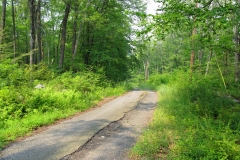 The roads we make are among the most permanent changes we effect on the landscape we live in. Yet once we stop maintaining them they fall quickly from the status of roadways, and become trails. This small gallery shows images of two roads in the process of becoming wooded paths.

The Lehigh and Hudson River Railway 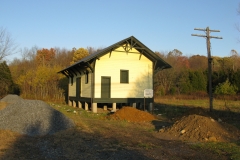 A few pictures from a recent walk along the old Lehigh and Hudson River railroad right of way north of Allamuchy, NJ.

Autumn in the Gap 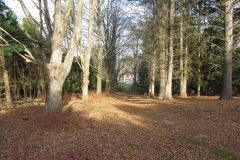 On my 48th birthday last Sunday I was given the gift of seven or eight hours of uninterrupted time. I spent it strolling through the hills and valleys of the former Pahaquarry township, in the Delaware Water Gap National Recreation Area. This gallery contains some images of the things I saw.

A Walk on the Pequest Fill 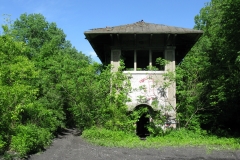 Pictures from a walk along the 110' high Pequest Fill, a major feature of the old DL&W Lackawanna Cut-off, and one of the historical marvels of railroad engineering.

At one time the Delaware, Lackawanna, and Western\'s viaduct over the Paulins Kill was the largest reinforced concrete structure in the world. Now it\'s the world\'s largest planter. 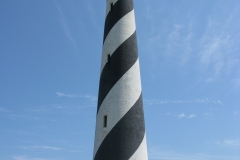 A gallery of images from our recent trip to the Outer Banks of North Carolina, to celebrate my brother's wedding. 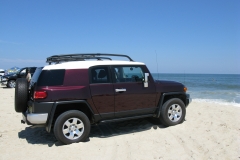 Pictures of my Toyota FJ Cruiser in various locations over the last year.